NGUENYYIEL REFUGEE CAMP, ETHIOPIA—When her 5-year-old grandson wakes in the middle of the night, shaking and screaming from the nightmares that haunt him, Nyayaul Gatkuoth Chol is worried but not surprised.

The youngster watched his father and grandfather, Chol’s husband and son, get murdered two years ago in neighbouring South Sudan.

Chol, along with tens of thousands of other South Sudanese refugees, fled the violence in Mathiang, a community about 500 kilometres away, to this dusty refugee camp in Ethiopia, where she now lives with four of her grandchildren and an orphan she also looks after.

Mental health issues are common among refugees in the camp, with some here blaming them on evil spirits. But Chol knows the violence her grandson saw back home is responsible for his night terrors. Living in this temporary camp, far from home and without enough to eat, adds to the child’s mental health challenges.

“We want to go home to South Sudan, but we can’t,” Chol says. “Not until the fighting is over.”

Despite recent positive political strides, including a peace deal last year aimed at ending the country’s five-year civil war, the world’s youngest state remains perpetually unstable, home to one of the worst humanitarian disasters. The crisis is characterized by gross human rights abuses, according to a recent UN report.

“Rapes, gang rapes, sexual mutilation, abductions and sexual slavery, as well as killings, have become commonplace in South Sudan,” noted Yasmin Sooka, the chair of the Commission on Human Rights in South Sudan, which produced the paper.

The result: a dispersed population with extensive mental health issues.

A 2016 report from Amnesty International found that decades of armed conflict in South Sudan have resulted in high levels of post-traumatic stress disorder, including among those who have fled the country. Another 2015 study found that almost half of all respondents showed signs of PTSD, 63 per cent reported losing a close family member to the violence, and 41 per cent had witnessed the murder of a close friend or family member.

Out of a population of about 12 million, 1.9 million South Sudanese are currently displaced within the country and more than two million are living in camps like these in neighbouring countries.

Nguenyyiel, the newest and biggest camp in the Gambella region, is home to more than 75,000 South Sudanese refugees. It was opened in 2016 following flare-ups between opposing South Sudanese factions to accommodate a new influx of refugees to this sparsely populated, low-lying and remote corner in southwest Ethiopia. The region currently hosts more than 360,000 refugees from South Sudan.

Most people here have lost at least one loved one. Everyone I spoke with worries about losing more.

Unlike most refugee camps, Nguenyyiel at first appears calm, clean and orderly. Neat rows of tukuls, the cone-shaped mud huts with thatched roofs common to this region, give the appearance of a genuine local village.

As we drive through the wide and tidy streets, I watch teenagers playing soccer, goats foraging for food, and youngsters dodging small dust whirls as they wander arm in arm among spotless latrines made of shiny corrugated metal.

But behind this hygienic order is a tenuousness that continues to threaten those living here. Outside the camp, the crisis has destabilized the region, where clashes between different ethnic groups are common. Women, children and youth make up the majority of residents in the camp — 62 per cent are younger than 18 — because many men remain behind in South Sudan to guard homes and farmland. Several women and children who left the safety of Nguenyyiel to collect firewood in the nearby forests have been sexually assaulted and killed.

The regional conflict is one of the thorniest challenges facing the new Ethiopian prime minister, Abiy Ahmed, whose first year in power was marked by far-reaching democratic reforms. He has freed thousands of political detainees, appointed women to half the country’s cabinet posts, and ended the country’s 20-year conflict with neighbouring Eritrea.

Earlier this month, Ahmed and Eritrean President Isaias Afwerki travelled to South Sudan to meet its president, Salva Kiir, for a discussion about regional security. Since gaining power, Ethiopia’s Ahmed has made the issue a priority. The region is also a priority for Canada, which has invested millions in foreign aid in South Sudan and Ethiopia, including in Nguenyyiel camp, where the Canadian flag and logo are ever-present.

Inside the camp, the human cost of regional instability is brought into focus when you see the high number of unhealthy little patients in the clinics set up here to treat malnourished babies. Action Against Hunger, the humanitarian organization I help lead, runs these health centres, which have recently seen a spike in the number of cases of severe acute malnutrition, also known as wasting.

The rise is partially due to a lack of clean water. Local officials and aid organizations installed a water system in 2017, with pipelines to serve Nguenyyiel and other camps in the region — as well as the local population — but a generator recently broke down. This has meant that camp residents only get half a day of water at a time, if they’re lucky.

In one clinic, we meet 19-year-old Mary Kuol, who sits with her sick 8-month-old daughter, Changkuoth, in the stabilization centre. Changkuoth was only 13 pounds when she was admitted, vomiting and suffering from diarrhea and respiratory problems. She’s now up to 15 pounds and the doctor in attendance expects she’ll make a full recovery.

Nyadok Tang, 22, may not be so lucky. Her 18-month-old son, Nyakoang, has an IV taped to his small and sunken face. He was admitted to the clinic with severe acute malnutrition and has not made much progress. Doctors suspect he has tuberculosis, so they will likely transfer Nyakoang and his mother to the hospital in Gambella town, a one-hour drive away, for further testing and treatment.

Tang has one other boy, a 4-year old. She has been in the camp for two years after walking here with her husband from their small village in South Sudan’s Upper Nile state. Tang has not heard from her family back home since arriving in Nguenyyiel. “I am worried about them,” she says, staring straight ahead with a grave expression. Because of the war, Tang never attended school. When I ask about her dreams for the future, she shrugs.

The suffering that these two young mothers have experienced is written all over their troubled faces; it’s the same with all the other moms in this clinic.

Medical teams in each of the five clinics we run here treat about 20 new children each day for severe acute malnutrition. The lack of water plays a role, but medical staff also know that poor mental health in mothers and their children exacerbates malnutrition in places like this.

In data from our psychological distress program team, 68 per cent of pregnant and lactating mothers were rated as having “significant” psychological problems. These conditions included high levels of depression, acute anxiety and fear, psychosomatic symptoms, self-harming and suicidal thoughts, substance misuse and psychotic symptoms.

While harrowing experiences and difficult living conditions haunt children like Chol’s grandson, they also affect young mothers like Kuol and Tang, hampering their ability to nurse, care for, and feed their small children. Staff in our clinics have spoken with mothers who worry that they can’t respond to their children’s needs or that they are unable to produce milk. This often results in early weaning, which can lead to malnutrition in fragile settings like this refugee camp.

It’s taken mental health a long time to come out of the shadows in countries like Canada. Similarly, it took the aid sector far too long to see the effects of trauma on our work. We now know that lots of factors drive malnutrition — from gender-based violence to PTSD — and it takes more than therapeutic foods to cure it.

Incorporating mental health considerations into programs for treating malnutrition in humanitarian crises is increasingly commonplace in places like Nguenyyiel camp, where our main medical facility has a dedicated psychological distress program as well as counselling support for young moms to help improve their mental well-being.

As I leave a treatment centre, I hear a chorus of women’s voices rising in song from inside one of the nearby buildings. This gathering of mothers and children is one of the many activities here aimed at improving psychological well-being. It’s a support group for young mothers — a space where they can come together to talk, sing, share experiences and learn about exclusive breastfeeding, hygiene, and other important child-care practices that will help prevent malnutrition and ensure their babies never return to these treatment centres.

I ask for a translation of what they’re singing:

“Us women we have been given counselling by the social workers and now we take it to our community. If a child is refusing to breastfeed and the mother doesn’t know what’s happened to her child, or the child is vomiting, with diarrhea … whenever you see these signs, take your child to the health centre for treatment.”

It’s good advice for any young parents, best delivered by a peer. Hopefully these songs will catch on and spread to all corners of this sprawling camp.

Action Against Hunger Canada is an international non-governmental organization that saves lives by eliminating hunger through the prevention, detection and treatment of undernutrition. 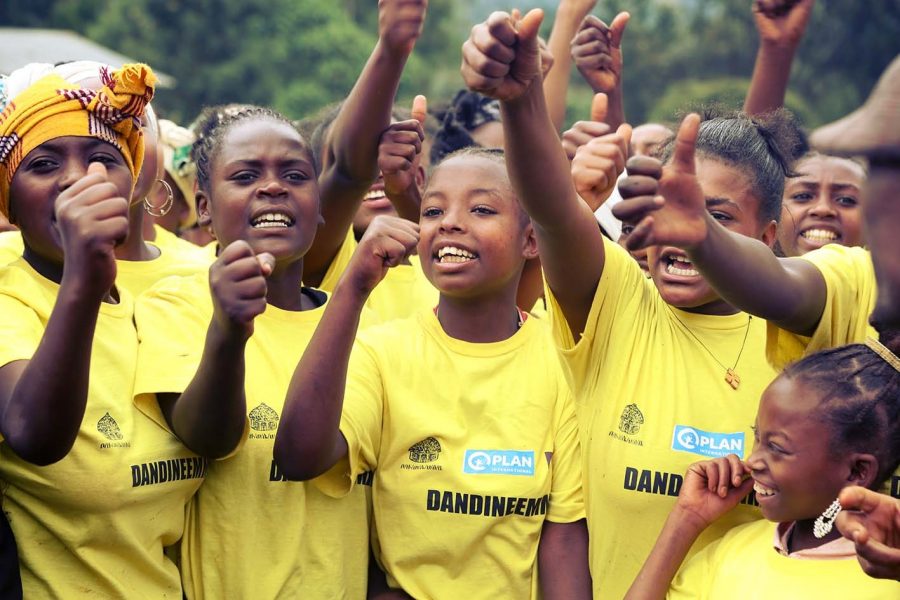 A Group of Teenage Girls are Helping End FGM in Ethiopia